The United States is home to some of the most sophisticated and famous art museums in the world, housing some of the most beautiful and expensive antique frames available.   And inside these frames are some of the most famous works of art in history, from Leonardo De Vinci to Roy Lichtenstein, with every type of frame, artistic era and medium being represented.

The following list is a compilation of the most popular art institutions in America, where you are able to see both stunning artwork, and with them, some of the most amazing frames.

The Metropolitan Museum of Art is the largest museum in the United States. It borders New York’s Central Park, and houses more than two million pieces of art in its permanent collection. Many of the pieces in this collection are curated from the Middle East, Africa, Europe and Asia.

The Metropolitan Museum of Art is always expanding, which is why it is the largest museum in the US. Recently in March 2016 it expanded its Whitney space in to the new Met Breuer, an extension and separate space from the Metropolitan which houses exclusive contemporary art pieces.

Must See Works of Art at the Metropolitan Museum of Art: One of the main attractions here and a must see is the Egyptian Collection. This collection includes the Temple Of Dendur, an original Egyptian temple dating from 15BC. There are also many couture designs by Balenciaga, Laurent and Chanel. 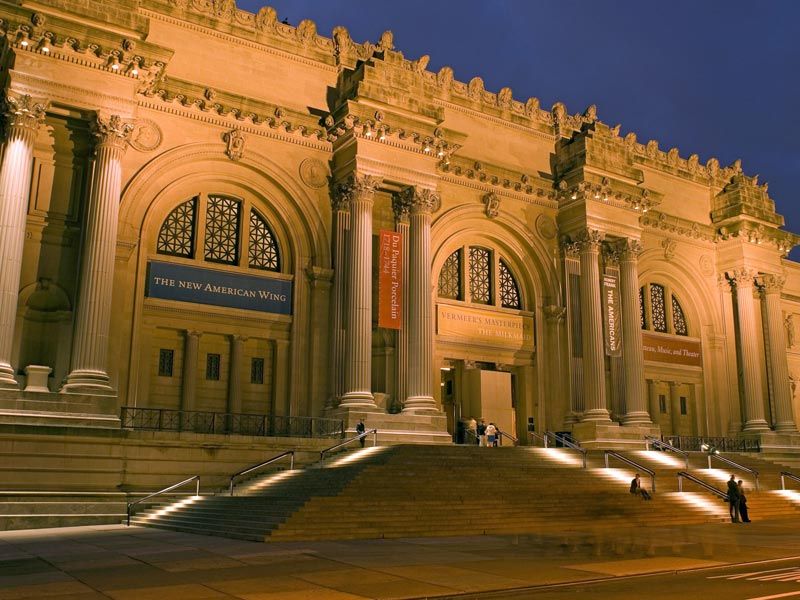 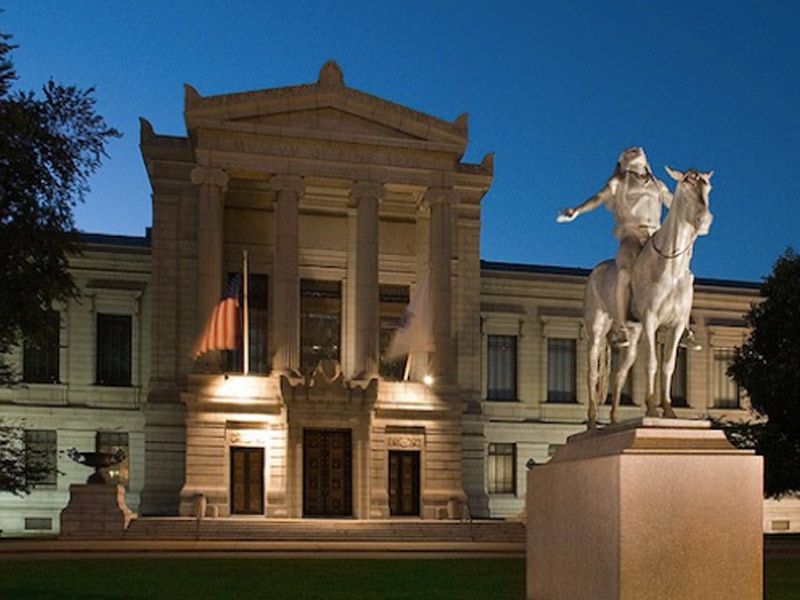 The Museum of Fine Arts in Boston is one of the largest museums in the United States of America, housing over 450,000 works of art. Its most renowned collections are American Art, Egyptian Art and its ongoing tech style exhibit, an exhibit that features fashion in the age of Sci-Fi technology.

The Museum of Fine Arts Boston has twinned with the city of Nagoya – The MFA’s Japanese Art Collection (the Edward S. Morse Collection) – jThis museum houses Americas most extensive collection of Japanese art and pottery outside of Japan.

If you are a big fan of music the Museum of fine Arts Boston has a gallery of 1,100 musical instruments dating back from medieval times until present complete with daily demonstrations.

Must See Works of Art at the Museum of Fine Arts Boston: Among all the collections here works by Gauguin, Cezanne and Monet are must sees. Gilbert Stuarts portrait of George Washington and and John Singleton Copleys portrait of Paul Revere. Copleys “Watson and the Shark” are also noteworthy.

The Philadelphia Museum of Art houses more than 220,000 pieces and is one of the most bustling museums. Amongst some of the pieces are intricate Persian and Turkish rugs. It also has one of the worlds most visited Rodin Sculpture collections.

The Philadelphia Museum of Art is a great place for young art lovers or fashionistas. The museum has many interesting exhibits from its fashion heavy Creative Africa exhibit to Play Installations by Joseph Kosuth.

Must See Works of Art at the Philadelphia Museum of Art: AMOR sculpture on museum steps, Basket of Fruit by Edouard Manet, Monte Sainte – Victoire by Paul Cezanne and the Creative Africa exhibition. The Keith L. and Katherine Sachs Collection of Private Art is one of the country’s leading private collections that is now open to the public at The Philadelphia Museum of Art. 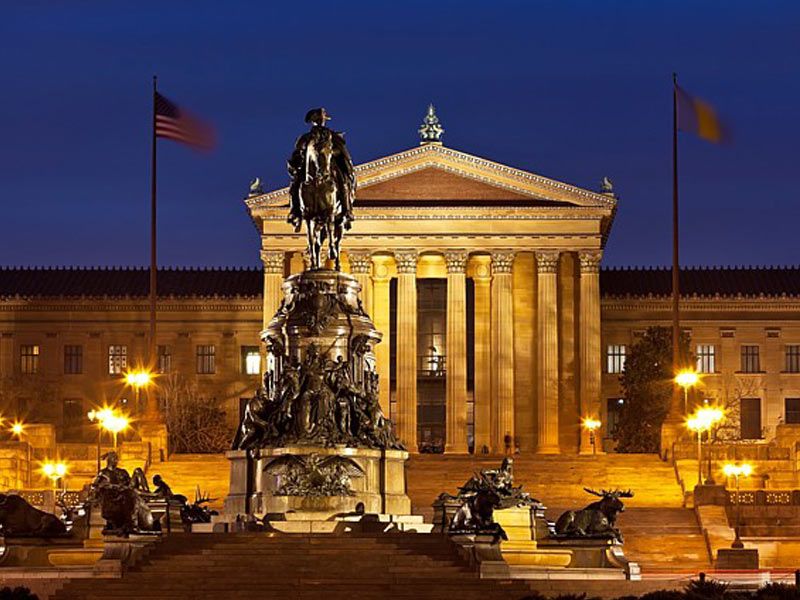 Established in 1937 and housed on the National Mall in Washington, DC, The National Gallery of Art is the united states national collection of fine art.

The Museum is split in to two buildings, the west building and the east building. The National Gallery of Art contains the American and European collections, in amongst these are the Kress collection featuring an abundance of Italian pieces. The museum also contains mostly modern art and special exhibition space.

Must See Works of Art at the National Gallery of Art: The Samuel Kress Collection. Portrait of Ginevra de’ Benci by Leonardo da Vinci.

Based in Midtown Manhattan, the Museum of Modern Art (MoMA) contains a vast collection of modern art. The museum also organizes many short exhibitions featuring collections from overseas, its a great space to exhibit with its stunning white abstract backdrops.

Some of the 20th centuries most recognisable paintings grace the walls of the Museum of Modern Art (MoMA) from artist such as Pollock, Picasso, Rousseau and Van Gogh.

Unlike many museums the Museum of Modern Art also has a restaurant that is open only to museum patrons. The restaurant named The Modern is one of New York City’s michelin starred restaurants.

Must See Works of Art at the Museum of Modern Art: The Sleeping Gypsy by Henri Rousseau, Number 31 by Jackson Pollock, Flag by Jasper Johns, Adele Bloch Bauer II by Gustav Klimts and Andy Warhol’s Campbell Soup Cans. But one of the main things to see is Vincent Van Gogh’s Starry Night which is incredible to view in person. 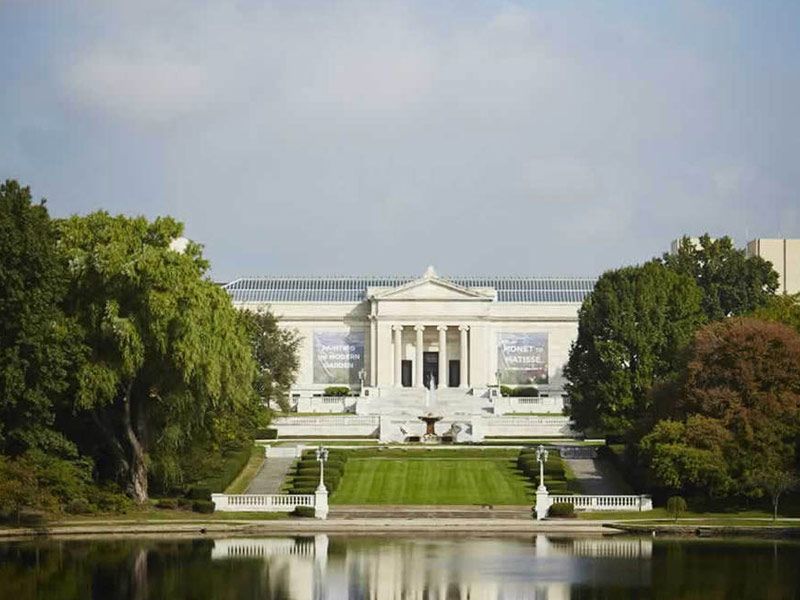 If you are visiting Ohio and want to visit an art museum then the Cleveland Museum of Art is the one to go. A buzzing 45,000 pice art museum that houses works of art from Matisse, Goya, Van Gogh and Botticelli. He museum displays the pieces in less crowded larger spaced galleries compared to other museums like the Met or MoMA.

The Cleveland Museum of Art has something for everyone and every age with pieces from Ancient Tibet to art models for children and is also the only museum to possess a surviving Gothic table fountain.

The Cleveland Museum of Art is holding a Centennial Celebration this year and will be pushing its boundaries by featuring the largest amount of artwork to date in the US by Albert Oehlen.

Must See Works of Art at The Cleveland Museum of Art: The Parisian Gothic Table Fountain from 1320 – 1340, Albert Oehlen Woods near Oehle, and the collection of 18th century French Monarchy and Bourgeoisie pre and post french revolution paintings.

The Art Institute of Chicago is the second largest art museum in the United States of America, its impressionist and post impressionist art are the highlights of the collections.

The Art Institute of Chicago is famous for its large collections of African American Art, Antique Asian Art, American Art and its collection of 20th Century furniture. This museum also has one of the largest collection of Monet paitings.

Must See Works Of Art at the Art Institute of Chicago: In the American Collection Grant Woods American Gothic piece is displayed, A Sunday Afternoon on the Island of La Grande Jatte by Georges Seurat’s along with many paintings by Cassatt, Cezanne, Renoir, Manet and Monet. 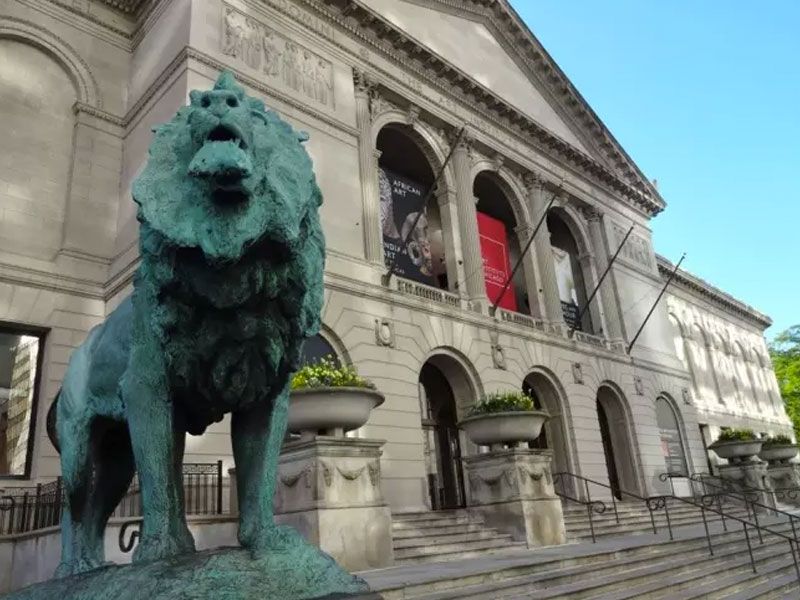 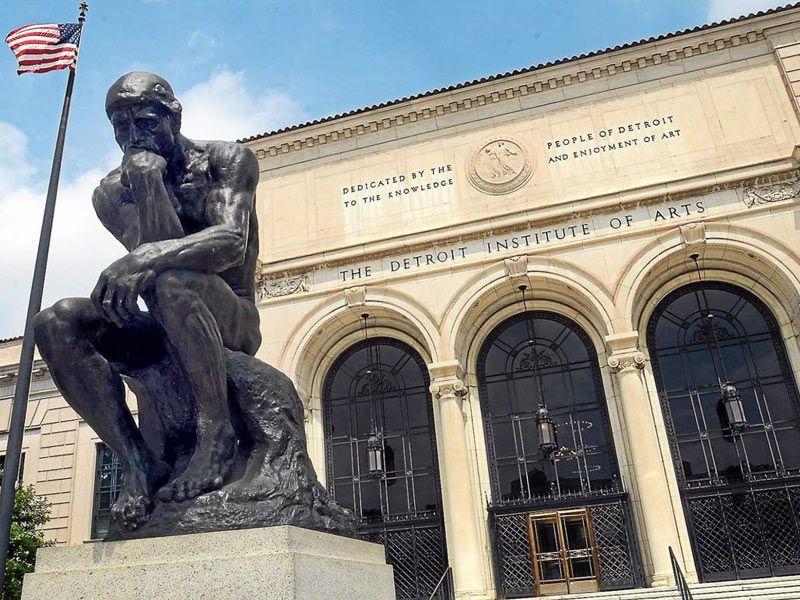 One of the smaller museums in America, the Detroit Institute of the Arts houses 65,000 pieces. The museum has exclusive collections of ancient artefacts along with early European and American art.

The Detroit Institute of the Arts is where Rodin’s The Thinker is displayed outside the actual entrance to the museum. A must see for any art enthusiast.

Must See Works of Art at the Detroit Institute of the Arts: Rodin’s The Thinker, Diego Rivera’s mural for the museum.

With an estimated 100,000 works of art displayed dating from ancient times to present day, the Los Angeles County Museum of Art or LACMA as it is usually called, is the largest art museum west of Chicago.

The LACMA is best known for its Pre Columbian and Latin American art displayed in its American galleries collection. Because of the usually good weather in California the museum has many outdoor temporary and permanent displays and installations.

Must See Works of Art at the Los Angeles County Museum of Art: Urban Light by Chris Burden is an iconic outdoor installation at the LACMA. Levitated Mass by artist Michael Heizer is the newest str artwork, which is a boulder sculpture. 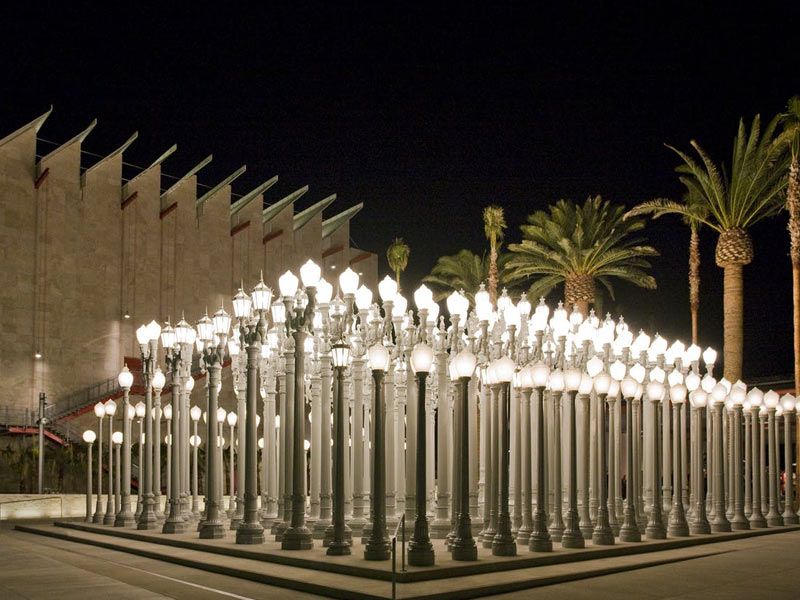 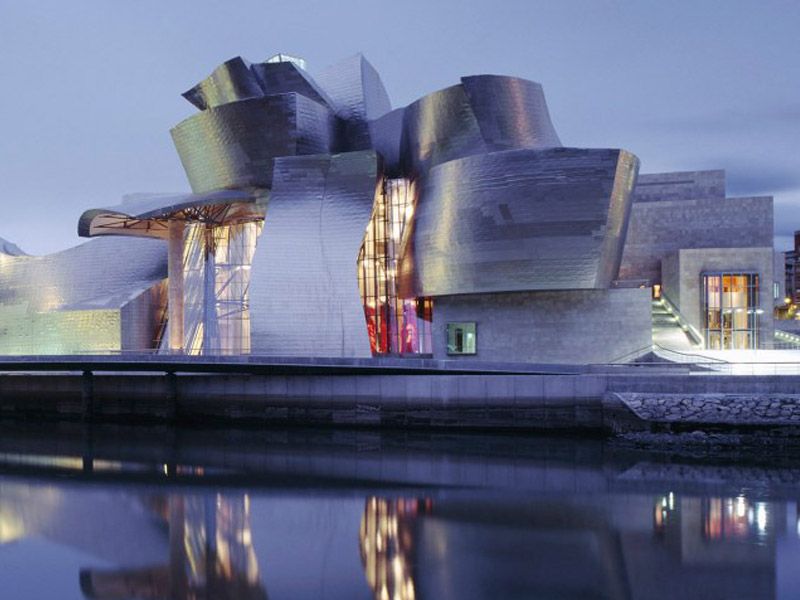 The Guggenheim, based on the Upper East Side of Manhatten is known for its modern artworks. The museum itself is set in a very distinctive building designed by Frank Lloyd Wright.

The Guggenheim was originally called The Museum of Non-Objective Painting when it opened in 1939. The first art displayed there was a collection of European and American Non-Objective and Abstract work. The Museum was then renamed in 1952 after its founder.

The Guggenheim now displays along with its original collection and core abstract collections works from many contemporary art genres, among these genres are Surrealism, Dada, Pop Art and Impressionism.

Must See Works Of Art at the Solomon R Guggenheim Museum: A whole gallery dedicated to the works of Vasiliy Kandinsky. Paris Through The Window by Marc Chagall, Edouard Manets Before The Mirror, The Robert Mapplethorpe Photography Collection, Amedeo Modigliani’s Nude and Pablo Picasso’s Woman with Yellow Hair.

Whilst the American Museum of Natural History did not make it on to our top 10 list, it is definitely worthy of a mention.  The museum itself has been seen by millions of people world wide, and is known for being the featured museum in the film Night At The Museum starring Ben Stiller.  Most of the filming was done inside the museum and many of the exhibits shown in the film are actual exhibits from inside the museum.

The American Museum of Natural History located on the Upper West Side of Manhattan is a complex museum comprising of 28 interconnected buildings and rooms housing 45 permanent exhibition halls including a planetarium and a library.

Must See Works Of Art at The American Museum of Natural History: Lucy, one of the most complete skeletons of  early hominids ever found, she’s over 3 million years old. A 94 feet Blue Whale exhibit, the large dinosaur exhibit and the Dzanga – Sangha Rainforest exhibit.