It probably goes without saying to most people that gold is one of the most valuable of all metals. It retains this high value due to its natural beauty, but also because it is one of the most malleable metals, meaning it can be moulded into the most intricate of designs and shapes.  Gold also has the added value in that it’s a metal that does not tarnish like most other metals.

The purity of gold itself is ascertained and expressed in carats, of which 24 carat gold represents the purest, finest gold, and this is usually the gold used for making gold leaf.  Gold leaf has been a mainstay in gilding statues, churches, public buildings, mast heads and hulls of ships, carriages, tomb stones weather vanes, clocks, shields and signs and many other things for as long as most of us can remember.

But just how easy is it to manufacture the gold leaf you’ll find in many of our frames?

Dating back to times of ancient Egypt, craftsman have used gold beating as a way to encase and entomb mummies in splendour, and also display gilded furniture and ornaments in their homes.   In order to achieve this, gold beaters would hammer the metal to a thinness of 1/250,000th of an inch or 70 millimicrons. Naturally this would take a lot of time and hard work by a highly skilled craftsman to complete the process, but the finished products were often breathtaking and can be seen today preserved and displayed in many museums around the world.  Amazingly, gold leaf manufactured today produced and crafted using similar methods of the ancient gold beaters.

Even in early history the method and stages of gold beating were both time consuming and intricate work.  For the first stage, gold is received from the merchant and then melted in a crucible and then cast in to a bar, before being rolled into a ribbon at which point squares are cut from this ready for beating.  For the first beating squares of gold are placed between sheets of a speciality paper called Montgolfier Paper, this process being known as “making the cutch”, and after 30 minutes of beating they are increased in size and reduced in thickness.

This newly formed sheet is then quartered into pieces ready for the second beating. This sectioning of the cutch makes what is known as “the shoder”, and after a further 50 minutes of beating using the same process (as used for the cutch) the squares are again doubled in size and reduced in thickness, and quartered again for the final stage.   The sectioned square is then placed ready for the final beating known as the mould process. 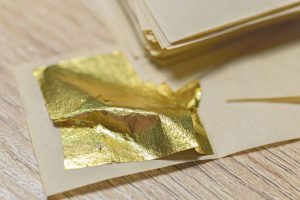 The moulding process is the most skilled and critical stage of creating gold leaf for that perfect picture frame, and can take four hours or more.    The mould is beaten repeatedly, and once this process is completed the resulting, ultra thin gold leaf is taken by craftsmen known as cutters.  The cutters have an extremely intricate task, and are responsible for taking each individual gold leaf separately and placing it onto a cushion ready for separation.  At this point (and with the aid of some boxwood pincers and another tool called a waggon) it’s time to separate the rough part of the leaf from beating from the smooth part ready for “booking”.

Whilst booking, the smooth parts are lifted with the pincers from the cushion and placed on some tissue paper within a book (the book holds 25 pieces of gold leaf) and once the cutter has booked the quality gold leaf, the rough parts that were separated are collected up ready for remelting, and thus the process begins again.  The finished gold leaf is typically sold in books of 25 leaves.

Throughout the whole process the gold beater must carefully increase the pattern of blows given to the metal from the hammer, whilst also keeping in mind that while beating the gold, there will also be an increase in temperature.   Too much heat can cause the gold to become distorted, so this is a very skilled aspect of golf leaf production.

Gold beating attracted the attention of Leonardo De Vinci who thought that the effort of beating by hand could be reduced and he even entertained the possibility that a machine could be used for gold beating.   Even so, there is no evidence that he was ever successful with this, and while modern scientific devices and experiments have made the process slightly easier (such as with battery operated hammers), it’s still largely a manual and extremely high skill process.  Battery operated hammers (used with light on handles, arms and heads over time) were also introduced which have provided some assistance to gold leaf manufacturers, as were cast iron hammers, but complete automation has never been possibly in what is, and may always be, a very skilled manufacturing process.    In fact, it’s largely the same process that has been present in history for over a thousand years.

Gold Leaf and Other Metals

Other metals such as silver, platinum and palladium can also be used and beaten into leaf, but they are used much less frequently than gold, since metals other than gold are simply much less malleable and can not be beaten as thin.

However, by combining gold with small quantities of other metals at the melting stage such as copper or silver, it is possible to form a deeper colour gold leaf, or even transforming the traditional gold colour of the leaf to green, yellow, red or white.

The information provided on this page may help you understand just why gold leaf frames retain, or even increase their value over time.   Amazingly, the intricacy and skill involved in producing gold leaf frames has remained largely unchanged through history, and highly skilled gold beaters and frame manufacturers are still in demand, much as they were through the most prevalent times in art history.

Should you wish to know more about our processes, please don’t hesitate to contact Frinton Frames, or even book a visit to our showroom.